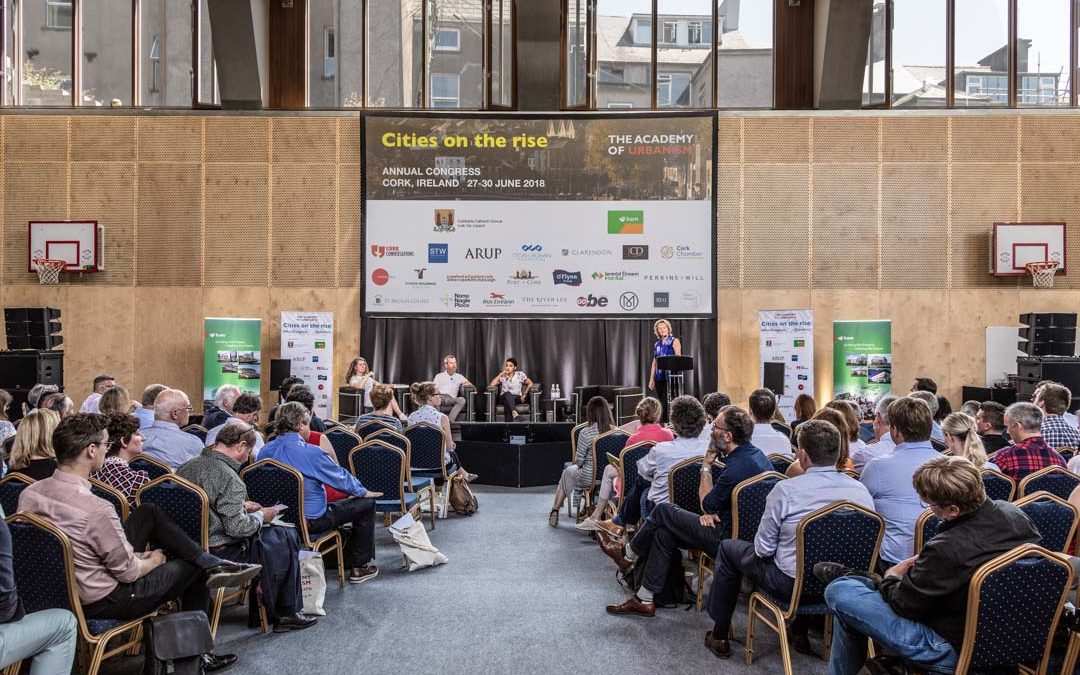 My client wanted a record of their conference being held abroad. They wanted excellent images that told the story of their event. They enjoyed it so much they asked me back.

When I had a management job in a corporate organisation I attended dozens of conferences and workshops and organised a few. This has helped me understand how to capture the key moments and do so without disrupting the conference sessions.

This conference was organised from London but held in Cork. It is held in a different country each year. The Commission for which I bid was to attend the 4 days of the Conference (from Wednesday evening to Saturday afternoon) and take images for the organisers of each part of the conference.

I laid out a shoot plan for my client and basically worked to that. It was logistically complex because the conference was in several different locations, included walking and cycling tours and even a boat ride as well as a formal dinner. There were plenary sessions and workshops, even a book signing. Venues included a school, a converted nunnery, a hotel, an auditorium and the City Hall.

As you can imagine I was continuously lugging a large bag of various equipment around with me, but having a plan that took account of everything including walking or taxiing time between shooting opportunities helped both me and my client enormously.

The variety of images was enormous. There were the formal speaking sets, the audience Q&As, the informal chats and reportage imagery, photographs of the settings being used, and of course the need to ensure that the images gave proper exposure to the people and businesses sponsoring and leading the conference.

When I’m on a job like this, my focus has to be entirely on the brief and on the agreed plan. Even them, I try to over-deliver. So on each day of the conference the slides used by the Conference to welcome everyone include images taken the day before and emailed to my client before me retiring to bed.

Of course shooting abroad has its issues. I have to have enough kit and supplies to be able to ride any problems. Whilst as a gold Canon Professional member I can command a stand-in lens or camera in case of failure, I had to be able to continue shooting immediately and not several hours later. I could not go back to my hotel or such. I had to have enough with me at all times to deal with contingencies, because things can go wrong in the best laid plans.

With time at the end of the day to back up and supply some images to the client, to clean the cameras and lenses, charge batteries and repack for the morning, this required long hours but like most enjoyable work, time didn’t seem to be as much of an issue as you might think.

Once back in the UK, I was able to tie up the job and was delighted that my client gave me a really positive 5 star review for publication.

“David was brilliant throughout from the moment we started talking about him covering the event. He went to a great deal of effort to understand our requirements and those of our partners and had clearly done his research. During the event, he was professional and helpful and was a pleasure to deal with, even during those inevitably tense moments you experience as an event organiser. The end product did not disappoint and was delivered quickly after event. David even went a step further by each day sending me a selection of the day’s photos. I wouldn’t hesitate to hire David again!”

And as it happened I was duly booked to do the same again the following year, in Eindoven in the Netherlands. I would have been involved again in 2020, in Edinburgh, but sadly the virus has left to that being cancelled and the next Conference will now be in 2021.

If you have a conference or business event that you are planning, please drop me a line about your photographic requirements.